10 Ways to Livestream your Business

Teenagers seem to have a new dance these days: running around, phones held high, squealing and gesturing into the air, completely oblivious to anyone over 25... and friends, it’s not The Twist they’re doing, it’s livestreaming. And as usual, they can teach us a lot because the biggest trend for 2016 in business was exactly that! Hang onto your hats, Gen X, it’s a thing, and I can help you learn how to use it for your business. 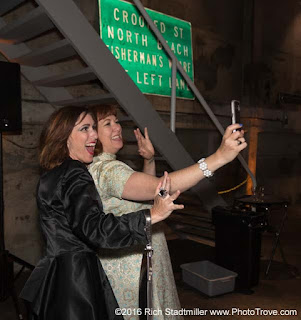 My friend Sunny and I broadcasting live from an event

First, you’ll need to master the technical details, which can be found on my previous blog post. If there is anything I didn’t cover in sufficient depth, as my 12-year-old says, “Google It!” To get used to the practice, play around with live broadcasts on different platforms (you can always delete them later!) and once you have the hang of it, then comes the real work. What are you going to broadcast? Short of answering “everything”, let me share some ideas:

Tour of your office / studio: One of the first Instagram lives I watched was an artist standing in the middle of his studio with his dog, drinking a beer. He was speaking into the camera at intervals, but mostly panning around to his workspace, the materials he had out, his beer, his dog… OK the dog was getting the most “likes” but it was a fascinating few minutes where I and a handful of others got to hear someone speak who’s work we had previously followed online, and seeing the stacks of raw materials and the tools he used made me look at his work with even more interest. It was as good as being given a tour in person. Well, that minus the beer and getting to pet the dog.

Show yourself or staff sampling food at your restaurant: No the viewers still won’t be able to taste it, but the visuals can be so much fun for this kind of thing! The possibility for candid humor abounds here as well, especially if you are particularly expressive of face. Not that I saved it for the archives, but the very first live I did was on FaceBook as I sat at Starbucks sampling one of their new coffee drinks. Friends who watched it said they cracked up over the face I made when I tasted how over-sugared the drink was, so this kind of thing can be used to humanize posts.

Demonstrate a how to: The world of the instructional video is something that pains many of us who had corporate jobs in the 80s and 90s, so we should be thrilled that it has loosened up and morphed into the more casual realm of livestreaming. The best part is that many of the venues allow you to save the MP4 files so you can later edit or publish on your website or YouTube as you see fit. Not to be confused with internal training, which should still remain internal, but many of your customers would love to see how it is that you do what you do. Candy making, carpentry, hair cutting, you name it. Show it going on live, and you’ve connected on a deeper level with your audience / clients. Re-posting clips of actual genius elsewhere can boost your SEO and help demonstrate your expertise in the field.

Interview Staff: why not do an impromptu Q&A in the office? Let your viewers get to know you and your team beyond what you carefully edit and post. The nature of livestreaming lends itself to un-rehearsed chat, so keep it informal and short. I would plan to ask people something about their area of strength or have them recount a story they love to tell. People love to talk, and it helps us connect with one another.

Day-in-the-life: Follow someone on their daily rounds of work, or film yourself if it isn’t dangerous. This behind-the-scenes, cinema verite technique can be effective to show a process (similar to a demo video) or a routine, such as feeding animals in a shelter, delivering newspapers or anything else that lends itself to a ride-along mindset.

Special event: this is perhaps the biggest use of livestreaming, and it’s a perfect fit. Whether you are broadcasting to those who couldn’t attend, or trying to build cachet by showing something not open to the public, the special event broadcast meshes well with social media’s aspirational feel. I will admit to watching lives filmed at award shows and fancy dinners which I would never be able to attend in reality.

Document changes: Are you having furniture delivered? Cutting your hair? Demo-ing an old office building? All of these moments can now be shared live and as they happen!

Work-in-progress: One of my favorite things to see on Instagram is when an artist shows images of the same work at different points in its creating. The work-in-progress broadcast takes this to another level and can be used to show process as well as steps. You could do a panorama of all current projects in your workshop, for example, or do a quick kitchen view while food prep is going on, for example, and then follow it up with a still photo post afterwards. For example, film a short live video of gift bags being assembled at an event, and then post a photo of the finished product on your event page.

Announcement: Livestreaming is the new press release! You can film yourself or staff making a business announcement or reading from a press release. The way to make this dynamic is to post in advance, stating the time that the live will be broadcast and reminding your fans to tune in to see it. Who rules this type of hype? Apple.

Q&A: finally, a live broadcast can be used to take questions from customers. You can set it up in advance so that people tweet their questions with a # that you will be following, and you can read them and answer them live, or you can also take the questions on the spot. Just be sure to read the questions aloud so that your viewers know what you are talking about! 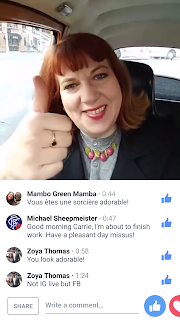 Livestream anything - even listening to music in your car!

As I said above, I really think you can livestream just about anything, and if you have other ideas, please share in the comments. Remember the purpose of the broadcast, and tailor your language and behavior to the occasion, but have fun with it. Of course you still want to ask yourself each time if it is in line with your marketing plan and your mission statement and if you answer yes, press that button!
Posted by carrieswing at 3:43 PM