Carried Away with Livestreaming!

Though I've been calling 2016 the Year the Music Died (still mourning the loss of David Bowie and so many others), for digital marketing purposes, it is the year of Livestream - see this completely biased yet interesting and data-filled post from Livestream.com to learn about global use of live streaming. It is a thing and not going away any time soon. Are you doing it?

We've come a long way since 2010, when live baby owls broke the Internet with a U-Stream of their owl box in Southern California which was watched by 20,000 people and generated 20 million pageviews - did you get caught up in that? I sure did, I can remember watching it with my (then) 6-year-old daughter and shouting "live baby owl cam" over and over! 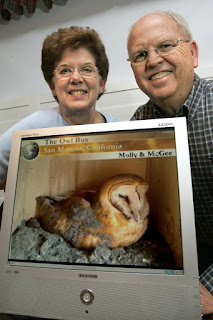 The Royals and their Owl Box: breaking the Internet before Kim K!

The baby owl cam, and the many other wildlife streams that copied it, were first generation and required detailed infrastructure like still-mounted cameras, cables, cords and formal web hosting to reach viewers around the world. The model was built on live streams offered from courtrooms and other business applications, running 24/7 regardless of viewers or content. In the 6 years since, we've striped away the barriers to entry so that anyone with a smart phone and a social media account can now broadcast live. Niche platforms like Periscope, Swarm and others offered livestreaming early on, but it was not until the megalith that is Facebook offered it (in August 2015) that it took off on a peer-to-peer level.

Livestream is now THE thing, and it isn't just for teens chatting to friends. Businesses at all levels are using it, from an artist live streaming new work in progress, to Fortune 500 companies livestreaming behind-the-scenes segments during business events and everything in between. It is ON.

I've been using Facebook live, and really enjoying it. Some of my broadcasts have a business focus (in fact, I appeared on a panel discussing eCommerce, which was broadcast in it's entirely on Facebook live) while others are just random silliness, like OH Wow, I have to share what I'm listening to on the radio Right Now! I even did a livestream to talk about doing livestreams: 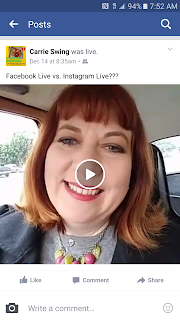 The thing I like best about livestreaming is the comments feature: your audience can comment on your stream as it happens. I use this often to ask questions (who uses FB live? how many sleeping puppies are in this pile?) and of course the ability to click "like" on the video as it plays, so that the broadcaster can see which element is the most popular.

Despite the fact that I love (and teach!) Instagram, I think the live feature is weaker than Facebook's. Note, Facebook owns Instagram now, so many of the same features are available, with the major exception being that Instagram Live broadcasts are not saved and cannot be replayed. Since Instagram live was just debuted in November, we can be sure to expect plenty of changes as the service becomes more popular. Though I have plenty of followers on Instagram, my broadcasts get few viewers and I am playing around with timing. Key also is announcing that the broadcast will be done. During the 2016 Election, I made the following announcement and then followed up with a later post giving the time ("Going live at 7pm with my dramatic reading, tune in!"). 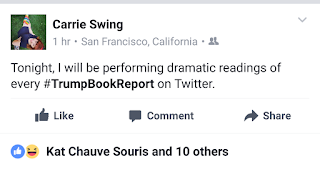 I could just as easily have made this announcement on Instagram and done the reading on that platform (had it been available then,) but Facebook saved the video so that friends who could not join in the moment were still able to watch later.

As mentioned, Instagram is just starting the whole live thing so I'm sure it will change as soon as next week, but for now, if someone you follow is currently live (when you open the app), you will see a purple "live" tag in their round circle which otherwise indicates they have posted an Instagram Story (these are short vids and images that only last for 24 hours on the platform in addition to the original photo grid / feed.) 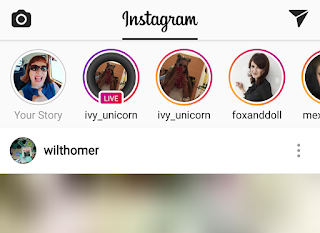 From my home screen, I can see that @ivy_unicorn is live

Then I can go to my story screen and start my own live broadcast, and here is what I would see before anyone started watching me: 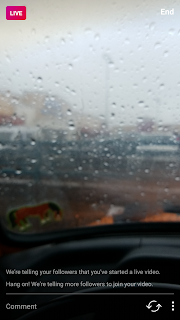 I've noticed that the popular videos on Instagram so far are - SHOCKINGLY - livestreams of pet accounts. Yes, I have watched, and "hearted" repeatedly streams of people's cats playing. I mean, of course I just use this for business research purposes ;)

I have to admit that I have not yet used Twitter live (a whole new meaning to "live tweeting" eh?) but I got this email announcement yesterday that it is available now, so stay tuned because I will try it too. 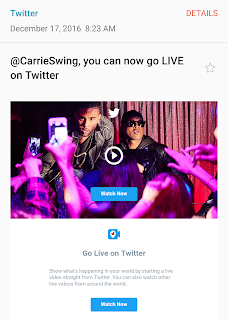 I wonder how soon till Donald Trump starts livestreaming? Did I mention that 2016 was the End of Times....

Posted by carrieswing at 2:20 PM